The Line Chart widget is a X-Y plot and represents data as a graph with lines and dots. A typical situation is when a 1-dimensional identifier such as the Demand(c) of a distribution center c in the TransNet application (see the “Quick Start: My First WebUI” section) is displayed like in the following picture: 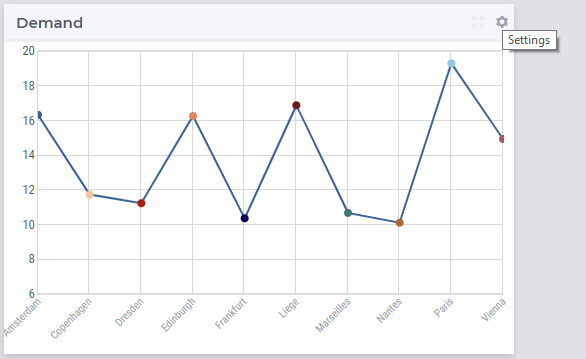 More generally, a line chart widget offers the possibility to display multi-dimensional data in your model by displaying a dot for each data point in the X/Y-plane. The Y-coordinate of a dot provides information about the value of the corresponding data point. The dots may be linked by lines in between rendering the graph. For example, in the TransNet application, the unit transport costs for every combination (factory, center) may be represented using a line chart widget like illustrated in more details in the sequel. More specifically, we discuss and illustrate below one-by-one the tabs in the line chart’s options editor which may be accessed through the Settings wheel as shown in the picture above.

In order to determine the information to be rendered by a line chart, first one has to specify the data identifier(s) in the Contents tab of the widget’s options editor, where one may search for the available model data using the corresponding functionality at the bottom:

Next, in the Pivot tab of the options editor, one can specify how the data dimensions are to be organized in the chart. For example, if both the factory index f and the center index c are specified in the X-axis section and the <IDENTIFIER-SET> in the Totals section then the resulting bar chart looks like in the picture below on the right:

So, now for every factory f there is a line in the chart with a different color. The three lines are drawn independent of each other.

If one moves the center index f to the Overlays section and the factory index f back to the X-axis, then the line chart view shows a line for every center:

Again, for every factory f there is a line in the chart with a different color, but the three lines are now drawn on the top of each other.

Negative values cannot be stacked in the line chart.

In software versions 4.74 onwards, the points that have no values (NULL) and are outside the domain are not plotted, potentially resulting in a discontinuous line. In earlier versions, the points were plotted with a default value (most probably 0 if not defined in the default attribute of the identifier).

In the Totals tab of the widget’s options editor, aggregated values such as sum, mean, count, min, or max computed over one of the data indexes may be added to the chart. In our example, suppose we change the pivoting to the situation where the factory index f is in Overlays section, the center index c is in the X-axis section and the <IDENTIFIER-SET> in the Totals section. In this case, if we add the mean over the centers c to our example line chart, then three additional dots representing the aggregated values become visible in the chart:

In the Linechart Settings tab of the widget’s options editor, a minimum and a maximum bound for the Y-axis may be specified, either as constants or as scalar identifiers from the model. Additionally, one may also specify a step size which determines the distance between the horizontal grid lines drawn in the chart: 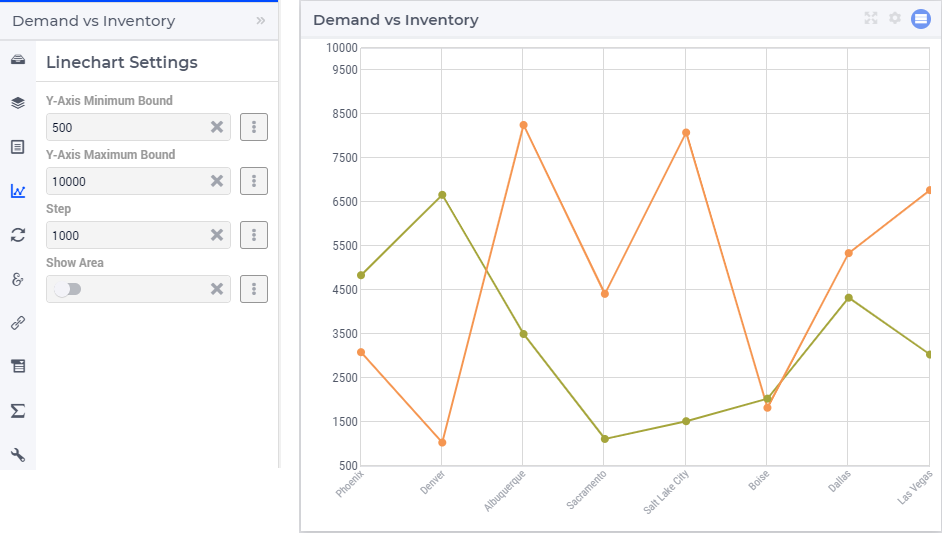 To depict the line chart as an area chart, one can switch the “Show Area” option on. This property can also be controlled via identifiers. 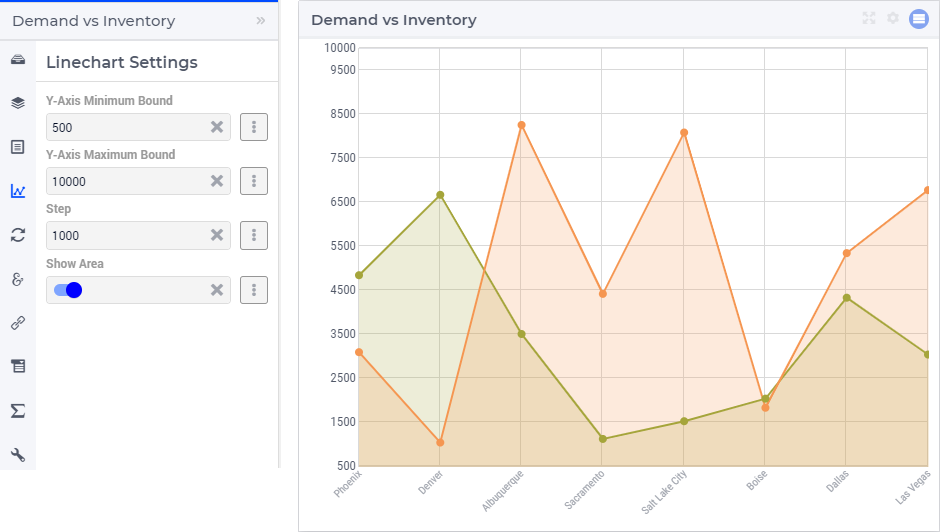 In the Identifier Settings tab of the widget’s options editor, one can apply a display domain or some slicing to the data identifier(s).

The “Set display domain” section works in the same way as for e.g. the bar chart.

In the “Set slicing per index” section it is possible to slice one index to another index of a subset, to an element parameter or to a fixed element in the corresponding set. For instance, we can slice our factory index f to the fixed element ‘Hamburg’ in the Factories set, resulting in the line chart view as shown here: 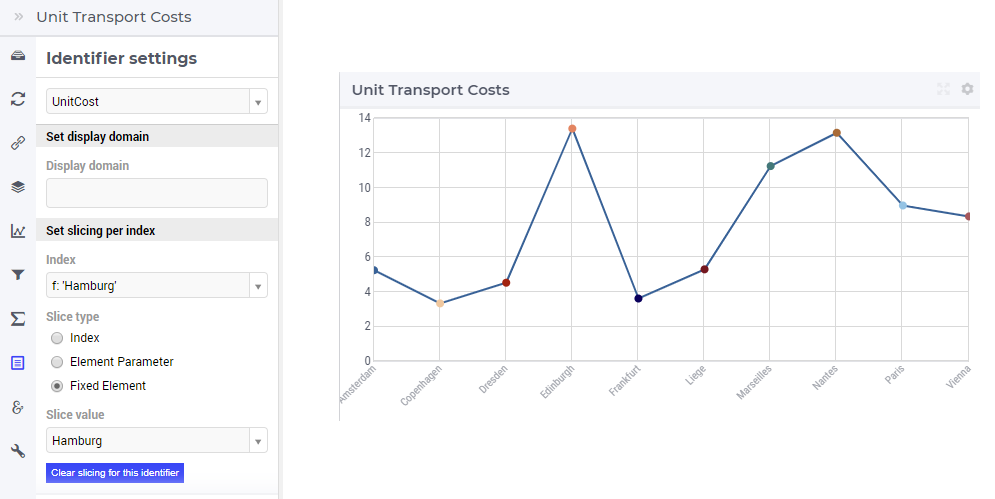 Similarly, one could slice the index f to an element parameter CurrentFactory having the declared range the set Factories (where the value of CurrentFactory may be determined from within the model or by a choice made through another widget in the user interface).

It is also possible to select a line by clicking on it, in which case the selected line is highlighted by a visible (gray) color, while the rest of the dots and lines are somewhat faded away: 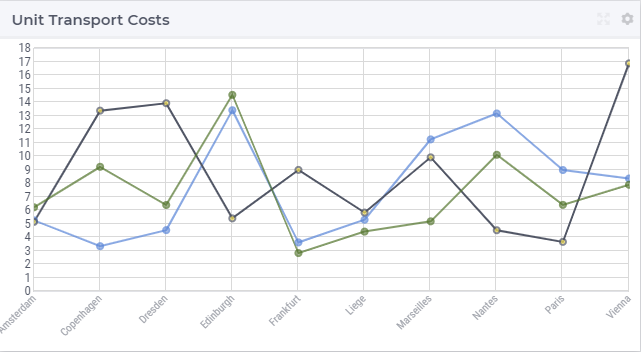 However, in this case the store focus cannot be applied, because such a selection does not determine a unique pair of values for the element parameters (SelectedFactory, SelectedCenter). Again, as a remark: a selected line may be unselected by clicking again on it.

Similar to the dots and the line, the area also has a hover and selected state, as illustrated below: 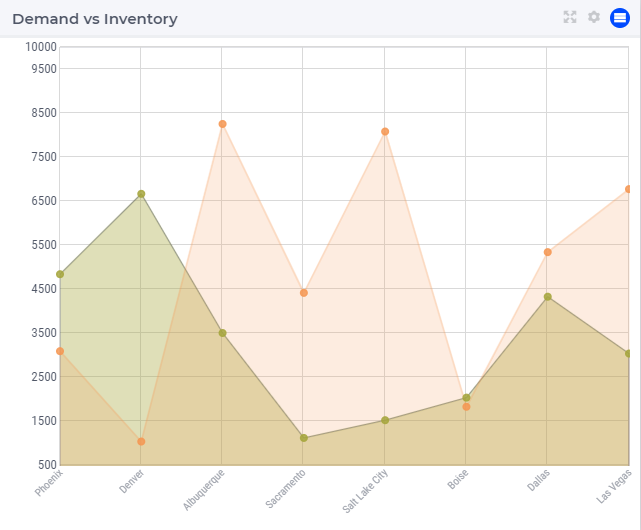 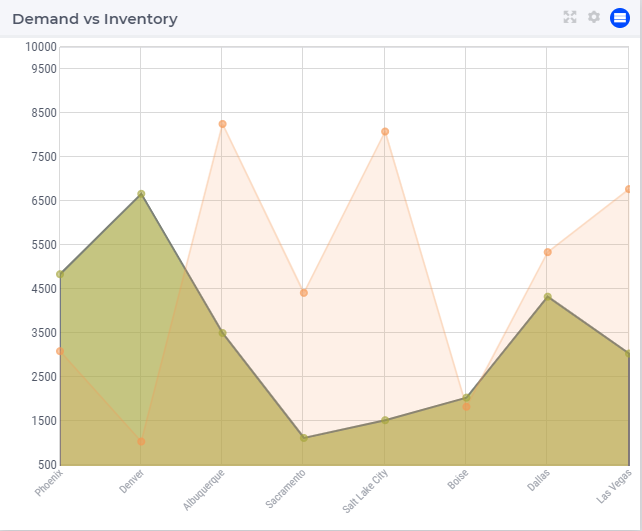 In the Line Chart widget the Hover and Select visual functionalities are available. However, when selecting a line, the line itself does not set any store focus elements as this cannot be uniquely determined. Only the nodes selections can set such store focus identifiers.

In the Widget Extensions tab, it is possible to add the string parameters configured for the Widget Actions and the Item Actions for the widget. 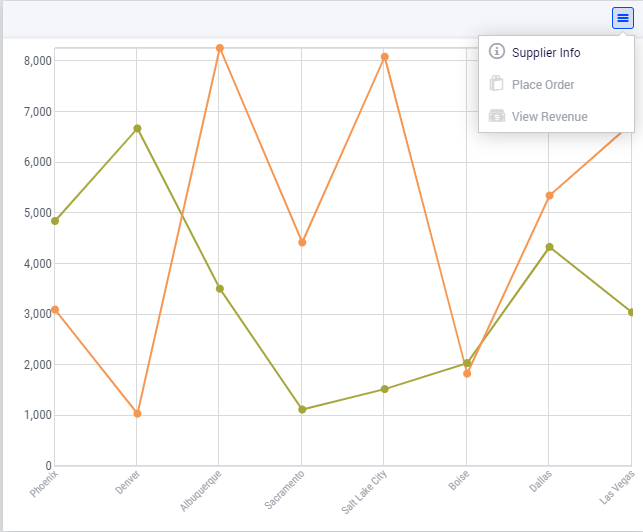 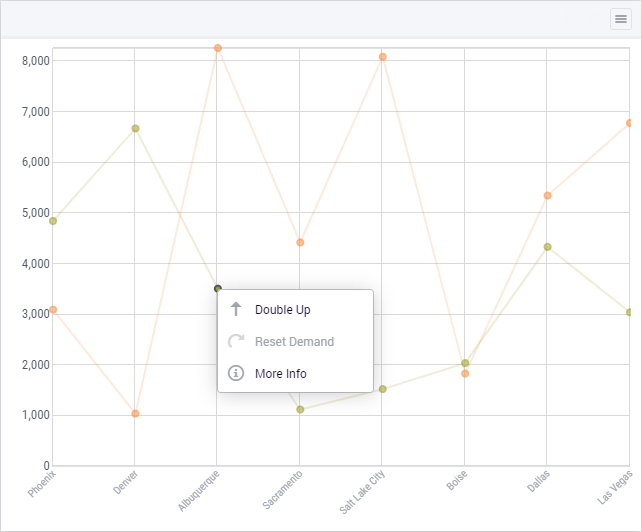 Item Actions also are available on the respective area of the identifier. 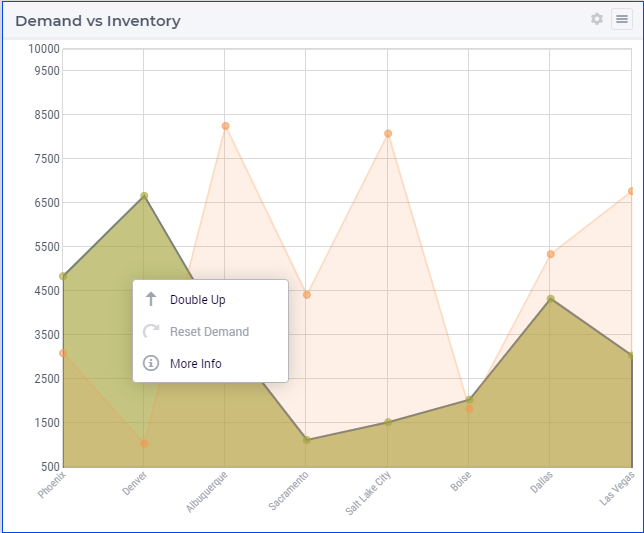 In the Miscellaneous tab of the line chart’s options editor, other options may be set such as the title of the widget, whether or not the widget is visible (this may be determined by a model parameter) or the number of decimals for the values displayed in the chart.

Not what you where looking for? Search the docs

Remember we also have Community support

Still having trouble ? Reach out to us